The Coolest Apartment Buildings in the World

The Kavanaugh Building is located in Buenos Aires, Argentina. The apartment building opened in 1936 after a two year construction period. The design of the building combines art deco and modernism, with a rationalist approach. There are a total of 105 apartments and the upper levels have exquisite terrace gardens with spectacular views of the city. Corina Kavanaugh was a 39 year old millionaire at the time the building was erected. She sold two ranches to build her own skyscraper. She lived on the 14th floor in the largest apartment for many years. The 14th floor is the only floor that houses just one apartment.

Absolute World, also referred to as The Marilyn Monroe Towers, is residential condominium twin tower skyscrapers in Mississauga, Ontario, Canada. The final two towers were to be designed by the winner of a competition held by the city. Out of over 600 registrants and 92 submissions from architects around the world, six finalists were picked. Yansong Ma from Beijing, China, was announced the winner on March 28, 2007. The towers are very unique rotating towers and tower one has six levels of underground parking. Tower 1 has 56 floors and tower 2 has 50. 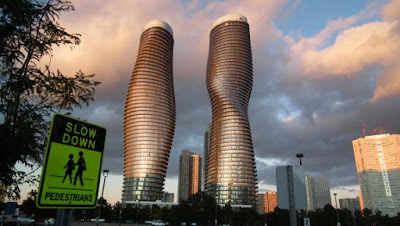 Designed by UNStudio, this modern building was built in 2006 and completed by 2011. This building is sure to stand out from the surrounding architecture. When UNStudio designed this building they really took into consideration the direction of the winds that hit the building, so that they wouldn’t affect the environment. 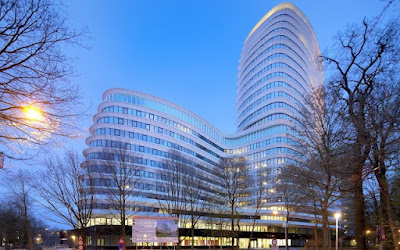 These two 15-story residential towers are located at the corners of Perry and West Streets. Designed by Richard Meier, they overlook the Hudson River and allow panoramic views of Manhattan and the New Jersey riverfront. Each floor is a single apartment of 1,800 square feet in the north tower at 173 Perry Street and 3,750 square feet in the south tower at 176 Perry Street. Perry West has housed a few well-known people, including Nicole Kidman, Martha Stewart, and Calvin Klein. 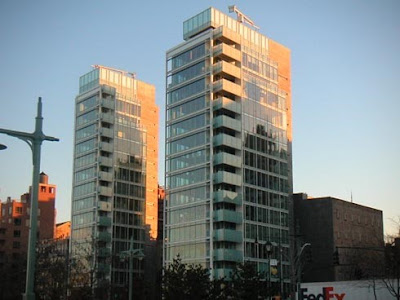 This apartment building is named quite literally after its design concept. Designed by Steven Holl Architects, the building began construction in 2003 and was completed in 2009 when the doors also opened to the public. There are 21 floors in each building and a total of 2,500 inhabitants. Within the entire complex, there are 750 apartments, hotel, cinema, educational facilities, a kindergarten, and a Montessori school. Linked Hybrid has won several awards for its design. Not only does it look cool, it contains geo-thermal wells to cool in summer and heat in winter. This is one of the largest green residential projects in the world. 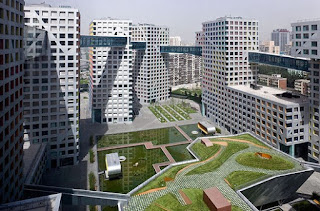 This 31-story building located at 38 Scotts Road, Singapore, is another beautiful building designed by UNStudio. The building offers one, two, three, and four bedroom apartments with two different social areas. The building has also been said to be its own vertical city. 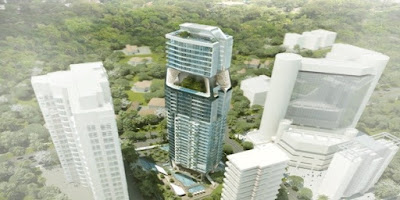 The Eureka Tower in Melbourne is a 91-story (plus one underground level) residential apartment building. Construction began in 2002 and by 2006 they were complete and had a hefty price tag of $415M for the finished project. Fender Katsalidis was the architect for the tower and the coolest part of this building has to be the observation deck on the 88th floor called Eureka Skydeck 88. The Skydeck is a glass cube that hangs over the tower called The Edge. 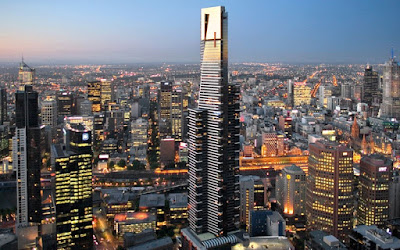 The Wave is a modern residential complex consisting of 115 luxury apartments spread out in 150,000 square feet of space. Designed by Henning Larsen Architects, it has won the prestigious architectural LEAF Award in the multiple occupancy category. It also won the annual Veijle Award in 2010 as Building of the Year. And yet another award in 2011 the project won at Civic Trust Awards.

I’Park City has a total of 88 apartments. Construction began in 2008 and the residential apartments opened in 2012. Another UNStudio design, this time the parcels were divided into a series of neighborhoods or zones. Each zone has a different name: City, Village, Field, Water, and Park are the names given to describe the different designs. 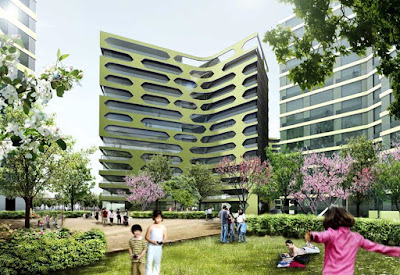 Built in the shape of the figure eight, 8 Tallet is Danish for 8 House. Designed by Bjarke Ingels, the building is mainly residential and about a quarter retail and office space. The apartments are on the top floors and the commercial spaces are on the lower levels. The concept behind this is that the commercial spaces are street level with people passing by and the residential spaces can benefit from the sunlight and fresh air. This is able to be because the shape of the 8 House is hoisted up in the northeast corner and pushed down in the southwest corner allowing light and air to enter the courtyard to the southernmost area. This design also allows for two courtyards. The building has won several awards, and we can see why! 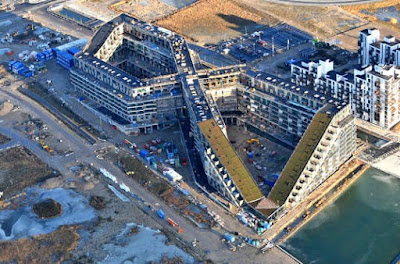 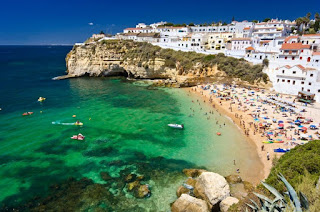 The Algarve, Portugal’s southernmost region, is known for its beautiful Mediterranean climate
and its beach and golf resorts. There are over 100 different beaches and over 30 hiking trails.  Word is you can find a three-bedroom villa with a pool for around £300,000. Or, if you’re more of the “oceanfront” kind of buyer, you could spend £6.2 million on a seven-bedroom home with gorgeous views of the Mediterranean. 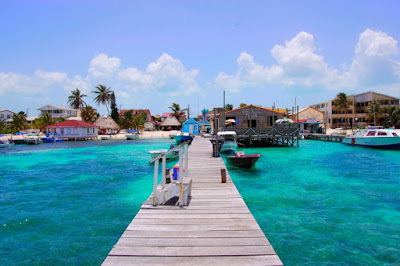 The largest island of Belize, most homes here are beachfront. Ambergris Caye is a highly sought after destination for many real estate investors and vacationers. 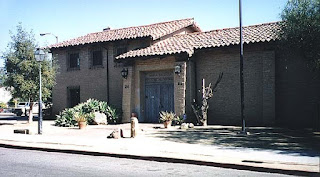 The museum is located at 136 East De la Guerra in the heart of historic downtown Santa Barbara, built in 1965 by the Santa Barbara Historical Society. It features relics from Chumash, Spanish, Mexican, Yankee and Chinese cultures, including artifacts, photographs, furnishings and textiles dating as far back as the 15th century. 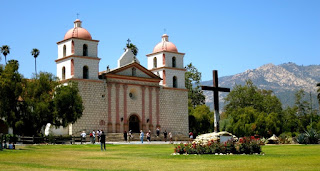 The Santa Barbara Mission was founded by Padre Fermin Lasuen on December 4, 1786, the feast day of Saint Barbara, as the tenth mission for the religious conversion of the indigenous local Chumash-Barbareno tribe of Native American people. Today, the Santa Barbara Mission continues to serve the community as a parish church. It also contains a gift shop, a museum, a Franciscan Friary, and a retreat house. The grounds are a primary tourist attraction in Santa Barbara. The Mission is owned by the Franciscan Province of Santa Barbara, and the local parish rents the church from the Franciscans. 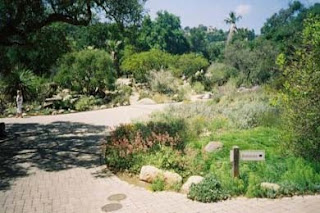 The Santa Barbara Botanic Garden is located in Mission Canyon, Santa Barbara, containing over 1,000 species of rare and indigenous plants. The garden sits on 78 acres and the purpose is the display California native plants in natural settings. There are about 5.7 miles of hiking trails within the garden. The Garden was founded by landscape architect Beatrix Farrand in 1926. There is a rock dam that was constructed in 1806 by Native Americans under the direction of the Spanish padres of the adjacent Mission Santa Barbara. The Garden became a Santa Barbara County Landmark in 1983. Part of the Botanic Garden was burned in the Jesusita Fire on May 6, 2009. Several buildings were destroyed by the fire and have not yet been replaced. Garden displays have recovered from the fire. 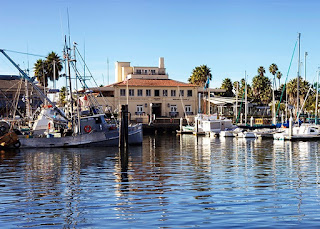 The Santa Barbara Maritime Museum opened its doors in July 2000, inside the Santa Barbara Waterfront Center (formerly the Naval Reserve Building). There are many different events including lectures, tastings, celebrations, special gatherings, and private meetings and parties. The Santa Barbara Maritime Museum also offers educational programs such as: Marine Science Program – For two weeks, about 400 children from elementary schools and after school programs participate, many of whom have never been out on the ocean or on a boat. Another program is the Tall Ship Program. This program allows students to spend the night aboard a tall ship living the life of an 1830’s sailor. They also offer a Science Night Program and a Book Club. 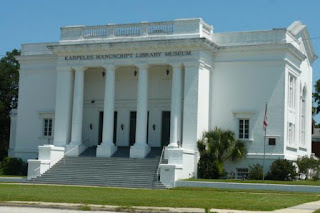 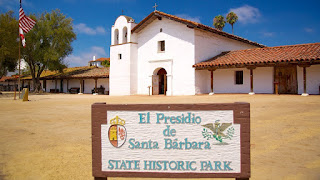 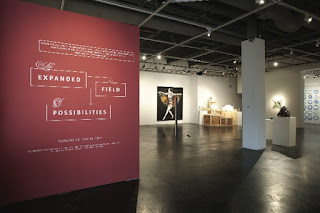 The Museum of Contemporary Art Santa Barbara was founded in 1976 by artists and supporters seeking a venue that was dedicated solely to contemporary art. There is no admission fee because MCASB believes that the arts should be accessible to all audiences of all persuasions. There are several different education projects put on by the MCASB which can be found on their website www.mcasantabarbara.org/learn. 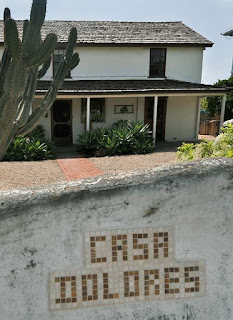 Casa Dolores, Center for the Study of the Popular Arts of Mexico is an art museum located on 1023 Bath Street in Santa Barbara, California. The museum is located in the Botiller Adobe house that was built in 1843, the oldest standing two-story adobe in Santa Barbara. The house was purchased by Linda Cathcart in 2007. The Museum houses art historian Linda Cathcart’s collection of over 6,000 objects in various media: clay, wood, ceramic, natural fibers, leather, paper, glass, clay, and tin. Some artists whose work is displayed include Josefina Aguilar, Teodora Blanco, Candelario Medrano, Abelardo Ruiz, Rosa Real de Nieto and the Linares family.